Cabin Fever is the long-held and well-loved film series presented by the Paradise Theatre in downtown Paonia. This series was conceived almost 20 years ago by local film enthusiasts who wanted to bring independent and foreign film to the big screen in their little, rural community.

The tradition continues, and for the sixth film in this year’s series, the Paradise is pleased to offer the truly independent film “The First Breath of Tengan Rei,” a Japanese/American collaboration. Screenings are Wednesday, March 24, and Thursday, March 25, at 7:30 p.m., and Saturday, March 27, at 1 p.m…

We’ll be doing a live video Q&A via Skype after all three screenings.

Tengan Rei returns to the Chicago area for our suburban premiere at the Lake County Film Festival. This is our second appearance at Lake County—our short film Homesick Blues played there in 2006. 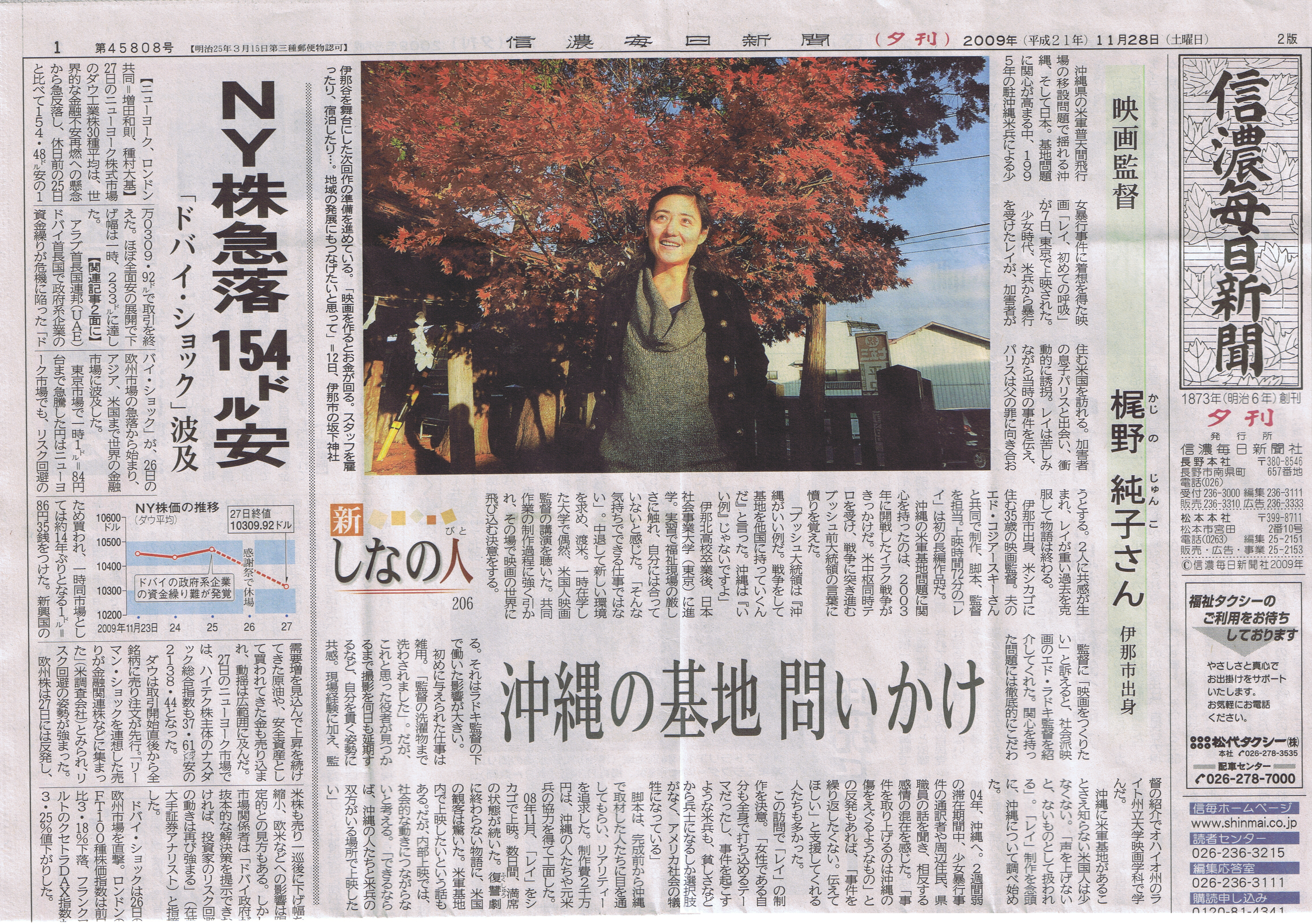 This article about Junko, translated here from the original Japanese, appeared on the front page of the Nov. 28, 2009 issue of Shinano Mainichi Shinbun, the newspaper serving her home province of Nagano, during the three-city Japan theatrical run of The First Breath of Tengan Rei:

See a pdf of the article.

Okinawa, Japan, where the Futenma Air Base relocation issue is the hottest news right now: military base issues in Okinawa once again have everybody’s attention in Japan. The feature film The First Breath of Tengan Rei, loosely based on the 1995 assault of a young Okinawan girl by three American soldiers, just had its Tokyo premier.

The film’s main character Rei was assaulted by U.S. soldiers when she was a teenager. Years later, she goes to America, where she meets one of the soldiers’ son, named Paris, and kidnaps him. Despite her painful past, she tells Paris her experience, forcing him to face his father’s history for the first time. An unexpected bond begins to form between Paris and Rei.

One of their inspirations goes back to the beginning of the Iraq War in 2003. After terrorists attacked the U.S., the Bush administration pushed relentlessly to invade and occupy Iraq. Koziarski questioned President Bush’s speech, when he said, “Okinawa is the good example” of American occupation. After World War II, the U.S. occupied Okinawa and built its bases there. Kajino says, “That can not be called a good example”

Kajino graduated from Inakita High School, and went to college in Tokyo, majoring in social welfare. When Kajino interned at a nursing home, she realized “I can not do this job with my half-hearted attitude.” She decided to quit the school and go to the U.S.

At a small college in the U.S., where she first studied English, she heard a guest lecture by an independent filmmaker. She was moved by his talk about the process of filmmaking – how films can be made with so many passionate people’s hard work. Just a year after she arrived in the U.S., she jumped into the filmmaking world.

The director who gave the lecture introduced Kajino to his friend Ed Radtke, who was going into the production on his second feature film. Kajino started to work as an assistant for Radtke’s production. But the jobs that she was assigned were cleaning, washing dishes, making coffee and copying. During her assistant work, she learned how Radtke insisted on his vision, even if it might cost time, money and hard labor that might not available to him with the limited resources in low budget film production. After working as an assistant, Kajino went to film school according to the director’s recommendation.

Kajino says “In the U.S., there are many people who might not know there are U.S. military bases in Okinawa. We need to raise our voices to increase awareness of this issue.” She decided to research Okinawa for the purpose of making a film about it.

In 2004, she visited Okinawa for the first time. Okinawans helped her to access the voices and experiences of living on a small island with big military bases. However, Okinawan attitudes toward military issues are complex. Some Okinawans were outraged when they heard that the film deals with the U.S. soldiers’ assault.

“Bringing up the incident like that is digging into the pain of Okinawa,” Junko was told many times. But others said, “You should tell the story, to help assure that it never happens again.” Some of the people who were angry at first became some of the film’s biggest supporters.

Junko decided to make the film after a few trips. “As a Japanese woman in America, I can put my real feeling to the story,” she says. “We also want to show the perspectives of the young Americans who may have no option but joining the military. They might be victims too.”

To complete the film, both directors tried to bring to life the perspectives of Okinawans. The film was financed through both Okinawans and people in U.S. – including former soldiers.

The film sold out its 2008 Chicago premiere, drawing positive audience response. Some audiences expected the film to be about revenge, but found it was something very different.

There have been several requests from military bases in Japan to screen the film, but it has not yet come to pass – military officials have hesitated when it came to making the final decision. But the directors believe the film has to be shown in public to both soldiers and people who live around the bases. Kajino says “the film will have real impact when they watch the film together.”

Watch out for news of the Tengan Rei DVD release, and Colorado screenings, plus more news from Japan!

Husband/wife filmmakers Ed M. Koziarski, an Antioch College alum, and Junko Kajino, a Wright State University alum, return to Yellow Springs, Ohio where they met in 1997, to screen their feature directorial debut, The First Breath of Tengan Rei, as part of the Nonstop Summer Alumni Festival.